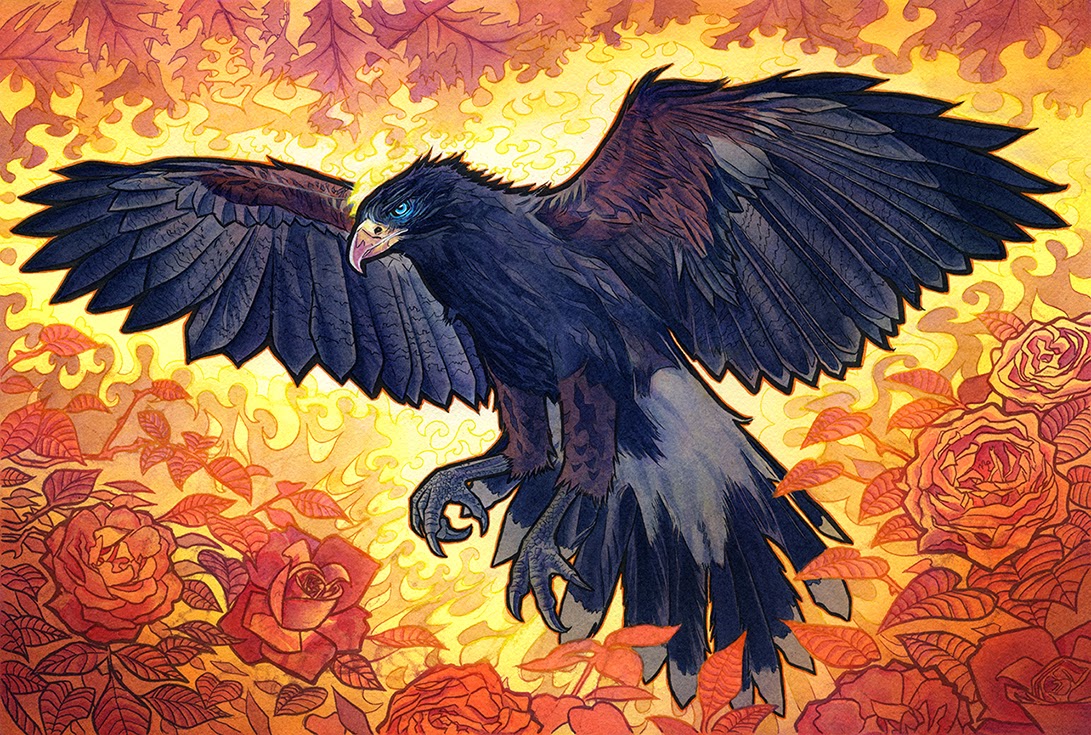 With this painting I changed my process some and tried painting on a new surface.  I love painting birds and wildlife, but I did not want to create a standard portrait as I did before.  I wanted to create something a little more dynamic, exciting and not so realistic. 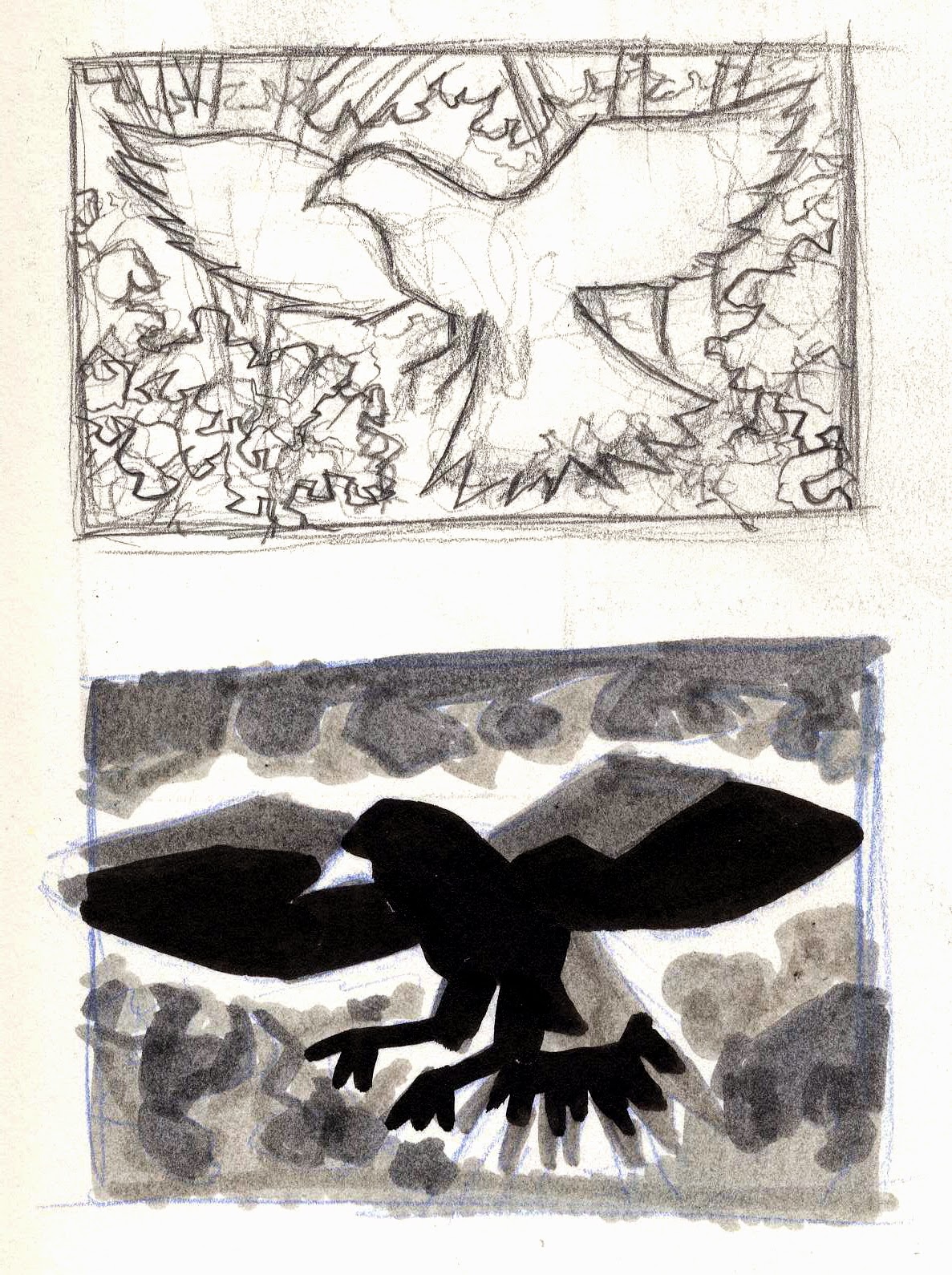 I first created a small thumbnail to give myself a basic idea for the composition.  I also made a small black, white, grey comp so I had an understanding of the overall values the piece would have.  I scanned the thumbnail, changed the lines to a light blue and then printed it out on a sheet of bristol.  I decided to work at 12” x 18” with a quarter inch bleed. 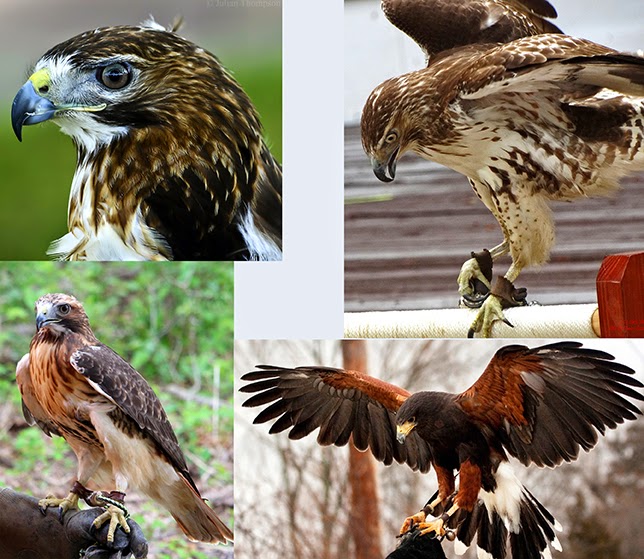 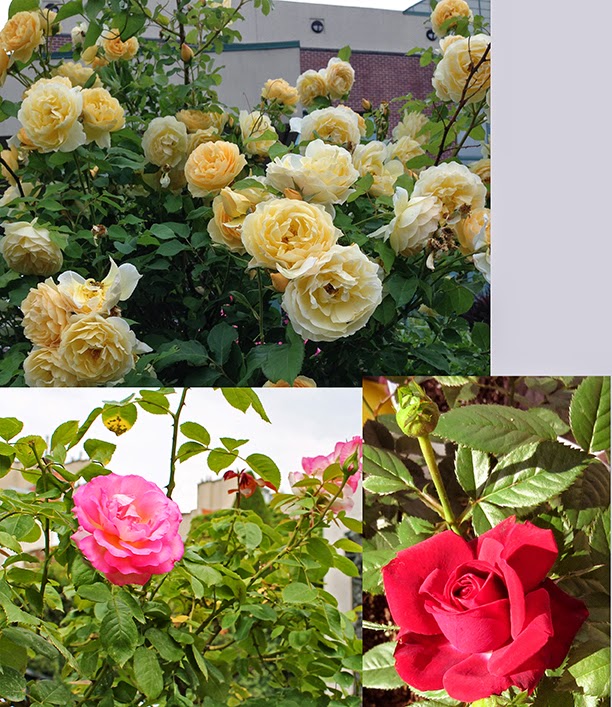 Here are some of the reference photos that I used.  A lot of the drawing I had to make up, particularly the talons and the head of the bird.  The flowers and leaves were just to frame the bird and most of it was drawn from my head.  I have learned that flowers are quite easy to draw and render.  A flower’s proportions can be distorted or stretched and it will still look like a flower. 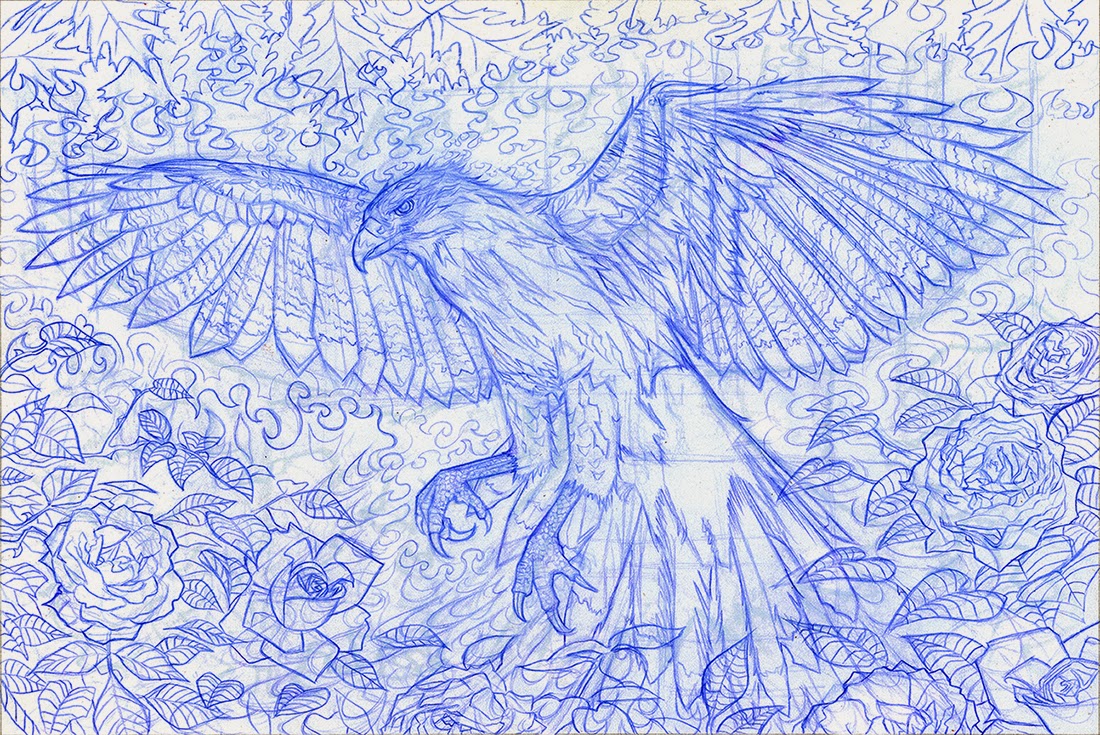 My drawing was done with a blue col-erase pencil.  I like doing this because the blue lines can be blasted away in photoshop. 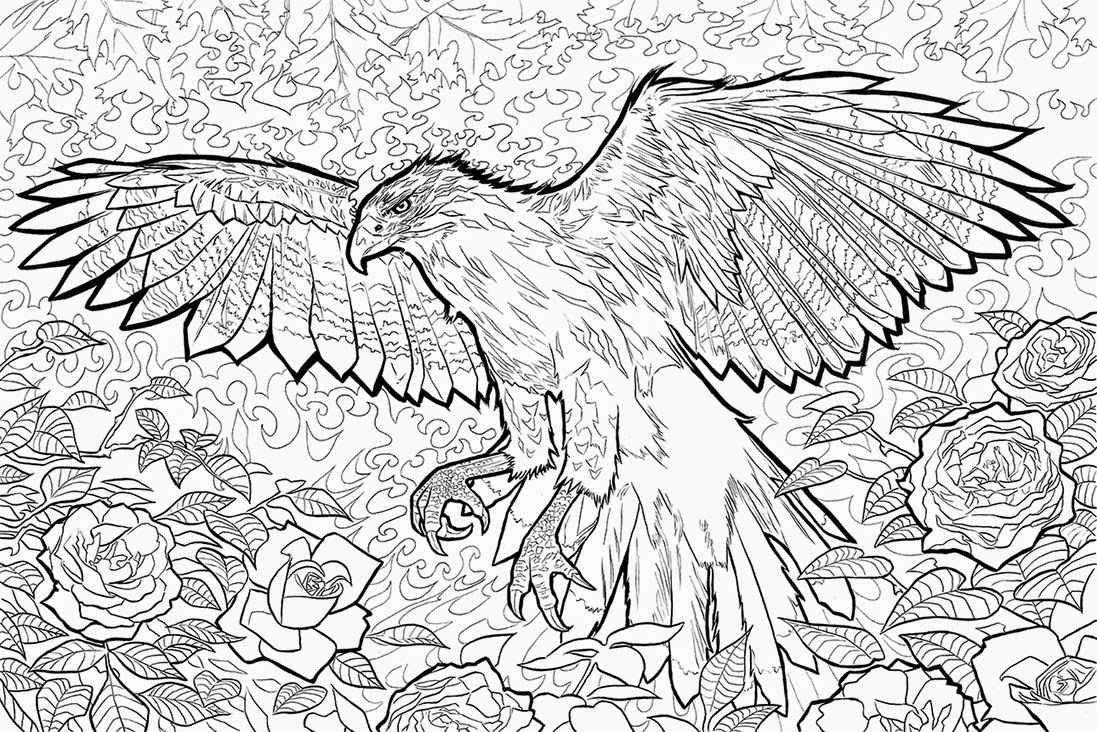 I mostly did the inking with a nib and holbein drawing ink.  I also used a few pitt pens as well as a brush pen for the much thicker lines.  After scanning it, getting rid of the blue pencil lines is quite easy.  In photoshop, go to image > adjustments > black & white.  Take the blue and cyan sliders all the way down to get a nice, clean drawing.  You can then use levels or curves to darken the remaining lines and blast away any remaining mess. 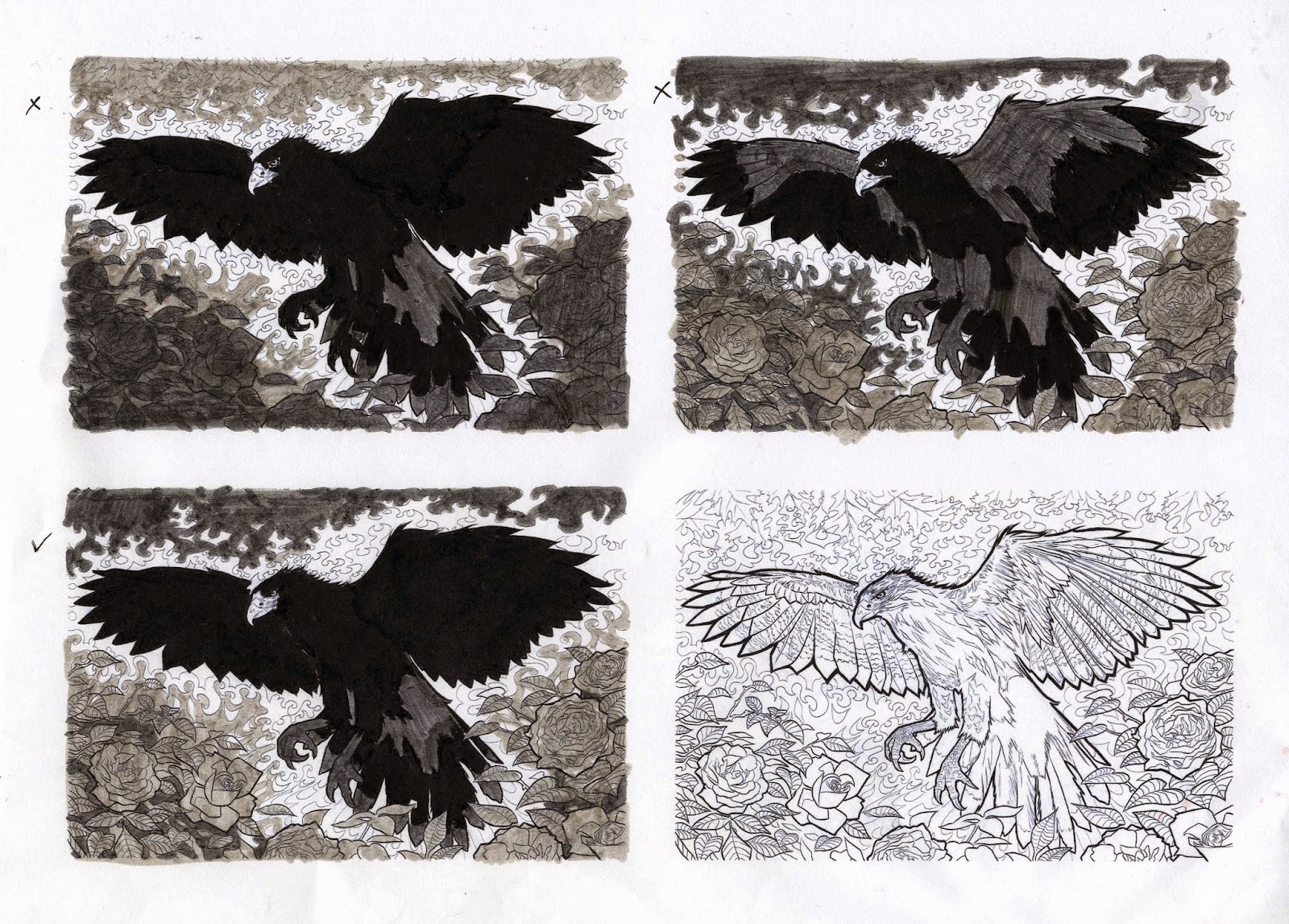 I printed out small versions of my inked drawing to do several more black, white, grey comps.  It is important that when you squint your eyes at the painting, that these overall values become apparent. 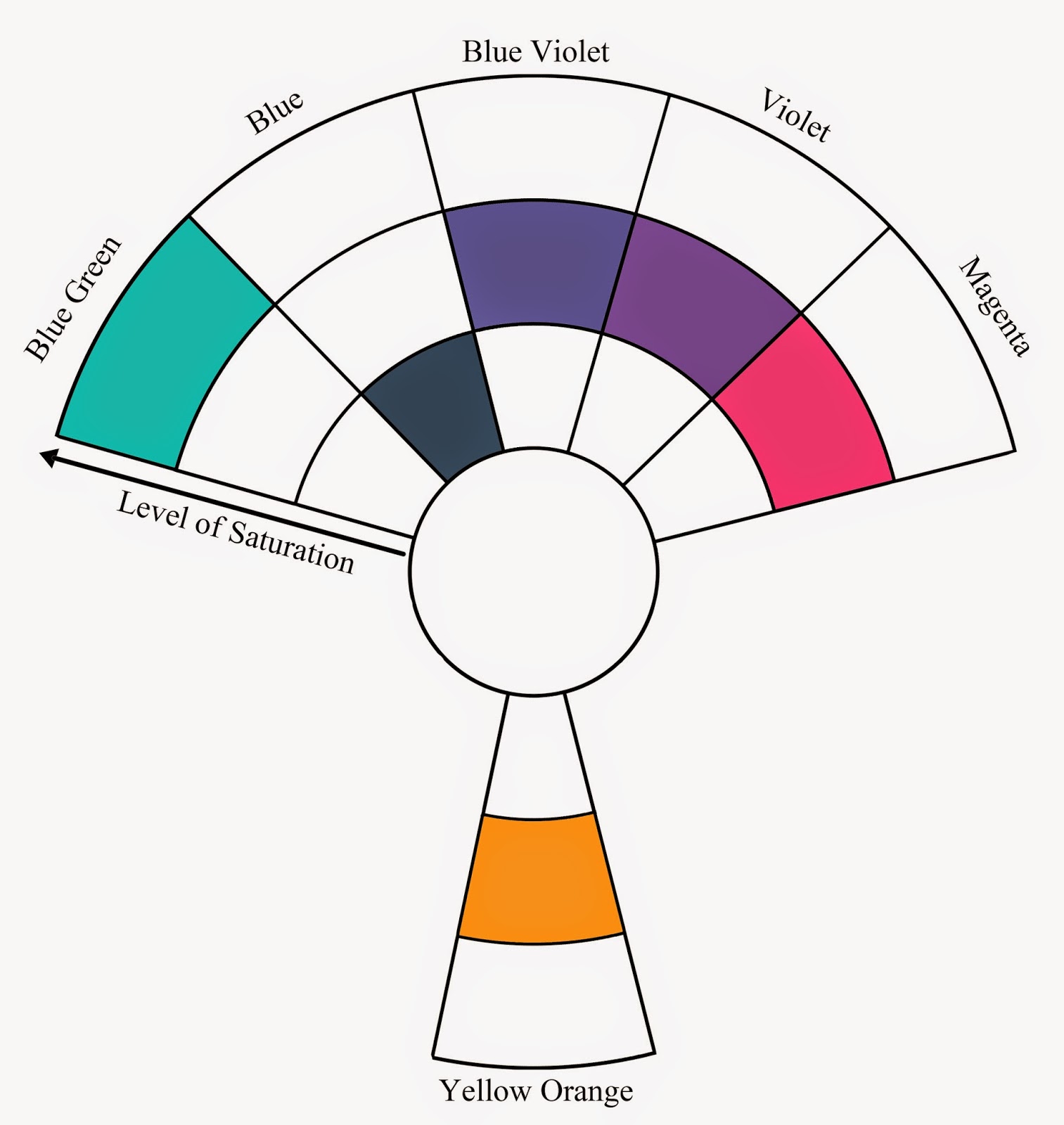 The “Y” is something I like to do when I use the color wheel.  Here you can see my overall color theory for the hawk.  Colors toward the middle of the wheel are desaturated while colors on the outside are at their purest.  The saturated blue-green is for the subject of the painting which is the hawk’s eye. 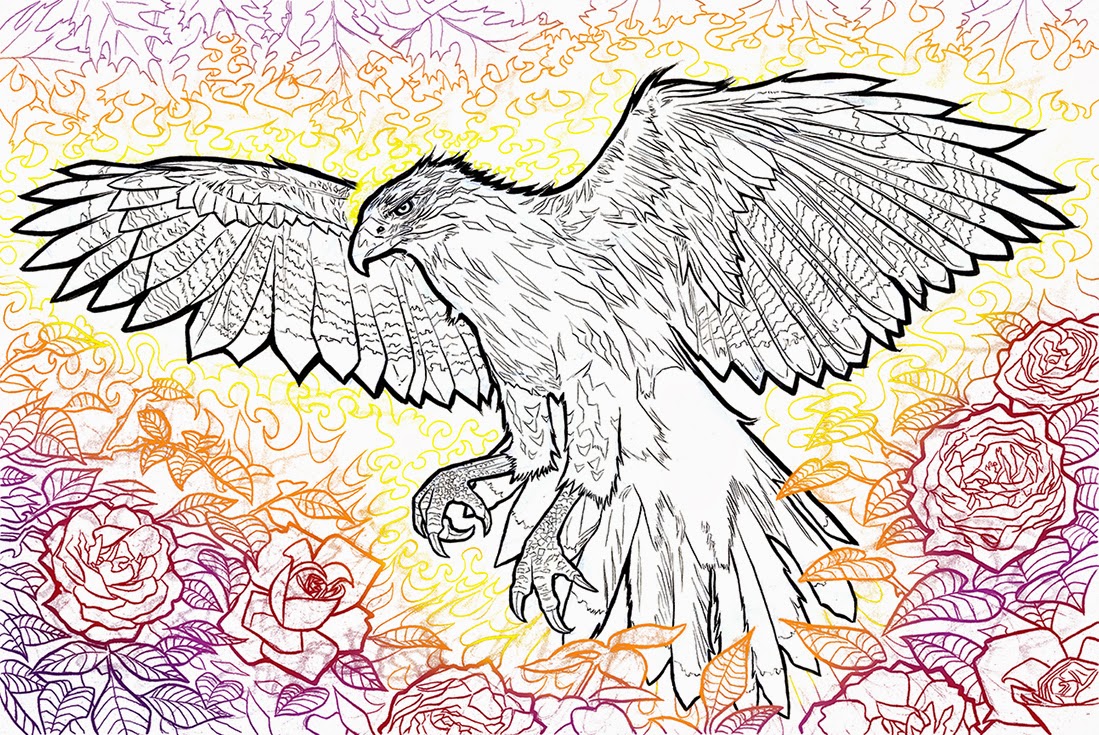 After I studied the color wheel, I then colorized the inked lines in photoshop.  I knew the fire around the bird would be a hot yellow and it would gradually turn to orange followed by magenta.  The background elements are gray so I did not want any of the lines to be black.  I wanted the hawk to pop off the background so I kept those lines black.  I printed the lines on 140 pound cold press watercolor paper. 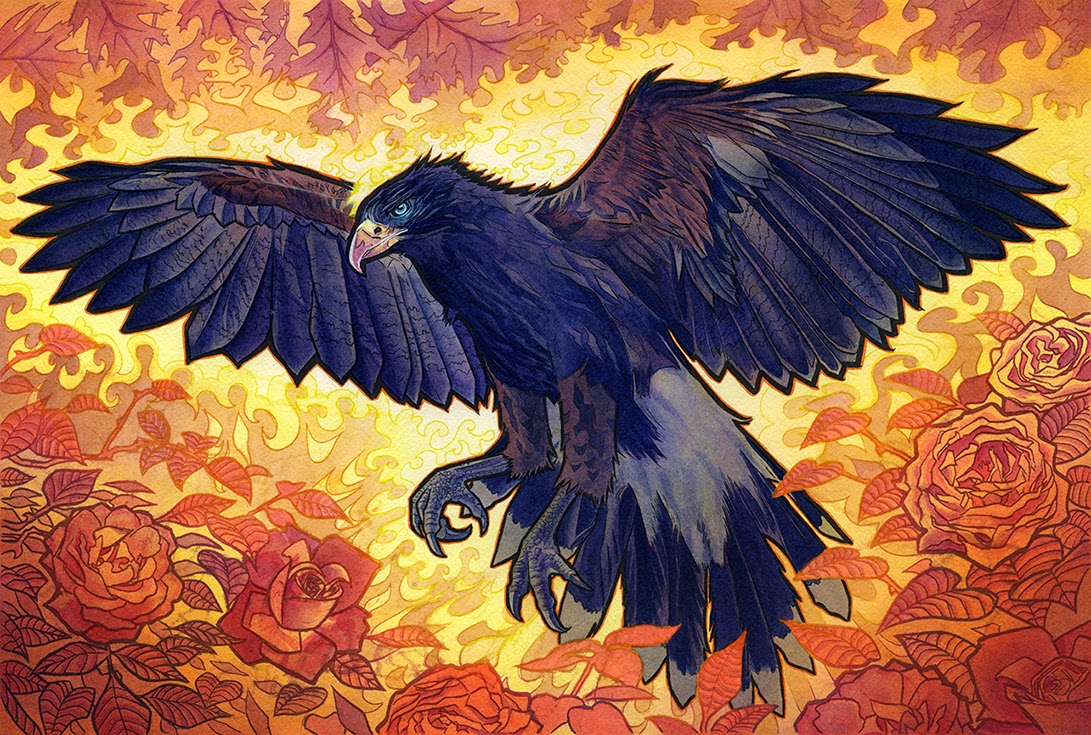 I did not document the painting this time with day by day photos, but I still followed the same procedure of painting the darkest areas first followed by the lightest areas.  Before I even started painting the hawk, I did a wash of paynes gray over the whole figure so I could trick my brain into painting more dark than I would on a white surface.  The only opaques in this painting are around the subject – the head, beak, eye and some of the feathers on the wings.  The eye has a pure “teal” color which is nice and opaque right out of the tube.

What you see in the previous image is the unaltered scan of the painting.  Warm colors scan perfectly fine but paynes gray hates being scanned – the blues show up way too saturated.  I had to do a color and saturation layer to tone down the blues in the feathers.  I was careful to mask off the background elements.  I did a separate layer to boost the saturation of the teal color in the hawk’s eye.  Finally I did a little bit of levels (since acrylics scan a little dark) to bring back more contrast.