Front Cover Finished! All illustrations for my book are done!! 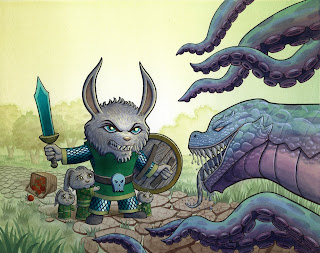 My book is almost done!  All the illustrations are finished, all that remains is the logo and font.  I will have to talk to the printer company to figure out printing costs and then make adjustments to the colors to get the illustrations print-ready.  The last step will be a kickstarter but that will go live sometime early next year - probably in February.

The front cover has a little more extra rendering than the other illustrations.  I also did a little more rendering digitally as well mostly on the rabbit's armor and fur.  Overall, it came out well, I look forward to working on the logo and font next.  Be on the lookout for my kickstarter early next year!  I will make some announcements a few weeks before it goes live!