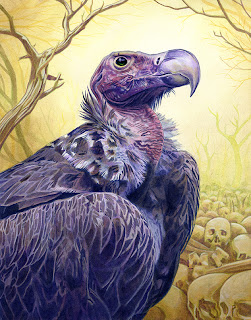 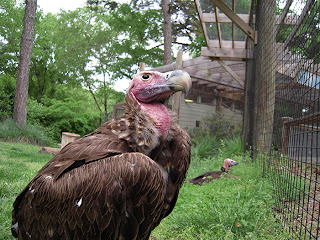 I went to the zoo a few weeks ago with the intentions of shooting some reference photos for a tiger painting.  Unfortunately the big cats did not make very interesting subjects and I could not get any good shots of them.  However the vulture and komodo dragon were awesome and I got a lot of great shots.  In the vulture reference photo you can see I got right up on the cage, he stood there for a good half hour only turning his head every now and then. 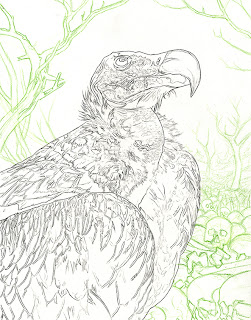 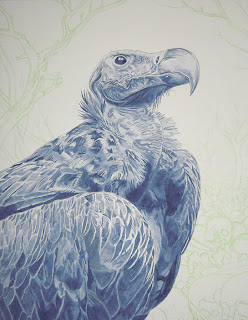 As I mentioned in previous posts, I like to start on the darkest areas first.  Whether or not those values are in my background or foreground doesn’t matter to me.  This is what works best for me; I think most people might be more comfortable always painting their background first.  Paynes grey is the color I use for my underpainting on the foreground. 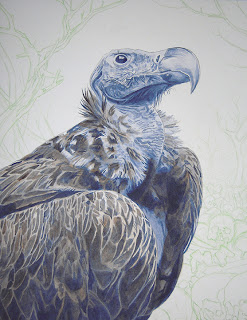 I decided to use an earth tone on the feathers (burnt umber) rather than jumping in with violets right away.  I wanted the bulk of the vultures feathers to be much more neutral in comparison to the colors around his head. 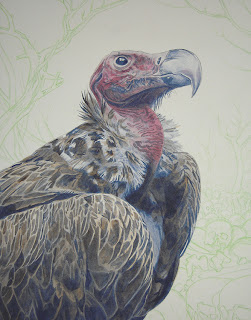 Here I layed in some alizarin crimson on the vulture’s head and neck.  I knew that as I began to put other colors in there, it would shift more in the direction of red violet. 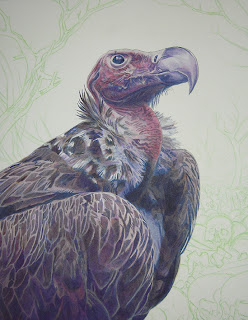 At this stage, I used dioxazine purple the same way I used the paynes grey.  When I painted his head and beak, I payed very close attention to my reference photo.  In the photo, you can see that his lower jaw is much more violet than the rest of his head. 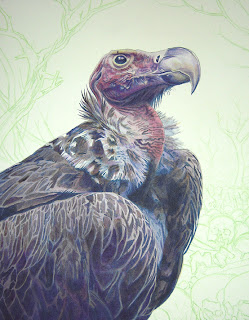 I went ahead and put some green gold on his beak and around his eye.  You may notice that I painted his head much darker than how it is in my reference.  This is mostly a contrast issue so the head of the vulture pops off the white of the board better.  Also at this stage, I went ahead and darkened areas that needed it using paynes grey before heading onto the background. 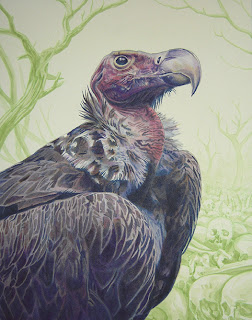 I started painting the background using sap green.  Sap green can get ugly and saturated quickly so I was careful to thin it down. 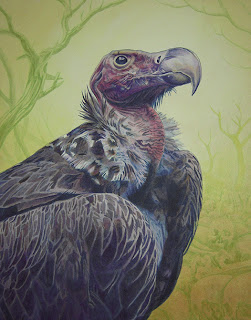 I did some light gradient washes with burnt umber to create a fuzzy halo around my subject.  This is to make sure that areas around his head are lower in contrast. 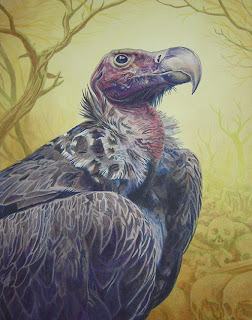 I darkened some of the background elements using primary magenta.  I also added some lighter ghostly branches using a watered down mixture of magenta and green gold. 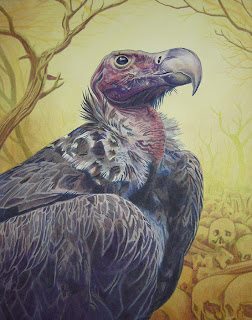 A lot of the background elements were not dark enough for me so I used dioxazine purple to add a little more value to those areas.  As mentioned in previous posts, I keep paynes grey out of my lightest area (in this case, the background).

When I feel all the foreground and background elements are where they should be as far as color and value are concerned, I head on to opaques.  Most of the opaques are on the background and around the vulture’s head and neck.  I used titanium white mixed with a little green gold on the largest tree branch and the pile of bones.  I used mostly pure titanium white on his head and neck but I am careful to thin it out so it has a little transparency.  Finally, I used titanium white, green gold and a little bit of phthalo green in his eye.